HOW CAN I FIND THE NEW ZONE RECOMMENDED FOR MY PROPERTY?

There are several ways that you can find the new zone recommended for your property:

HOW WILL THE COUNTYWIDE MAP AMENDMENT AFFECT MY PROPERTY?

In most circumstances, properties within Prince George’s County will only experience very minor changes to its zoning. The most common change to single-family residential zones is that the name of the zone may change. Most requirements of these zones and the uses that are allowed in these zones remain the same as current laws. For example, if you live in a single-family house today, your property is most likely in a single-family zone under current regulations. Your new zone will also be a single-family zone under the new regulations. Multifamily, commercial, industrial, and mixed-use properties are likely to experience more changes, most typically to expand flexibility in terms of the types of uses these zones will permit in the future. To learn how the zone on your property will transition in the Countywide Map Amendment, visit zoningpgc.pgplanning.com to view digital zoning maps.

DOES THE COUNTYWIDE MAP AMENDMENT AFFECT THE PERMITTING OR DEVELOPMENT REVIEW PROCESS?

CAN I REQUEST A DIFFERENT ZONE FOR MY PROPERTY?

The CMA process is a non-substantive, technical exercise that transitions a property’s existing zone district to the most comparable zone district that is in the new Zoning Ordinance. This process is not intended to be a “zoning grab-bag” for property owners.

The CMA process allows property owners to request specific zones for their property, but the requests are limited in certain ways. To request a zoning change, a property owner must complete a zoning request form (download here). The zoning request must detail and justify a technical error in the application of the Guide to New Zones (or decision matrix approved by the County Council at initiation of the CMA) to the property. Zoning request forms must also be accompanied by an applicable affidavit and ex parte forms as required by State law.

HOW CAN I LEARN MORE ABOUT THE CHANGES IN THE NEW ZONING ORDINANCE?

Planning Staff developed a comprehensive document which highlights the major changes of the new zoning ordinance compared to the existing one. In addition, you can also review the Visual Guide to New Zoning Categories which summarizes each of the purposes, dimensional regulations, and proposed uses for each zone category. This information can be found on the project’s website at zoningpgc.pgplanning.com.

MY PROPERTY IS IN THE CITY OF LAUREL. WILL THIS PROJECT AFFECT ME?

No. Property located within the City of Laurel is not subject to the County’s Zoning Ordinance and the CMA will not rezone any property within the City.

HOW WILL THE COUNTYWIDE MAP AMENDMENT AFFECT PROPERTIES THAT WERE INCLUDED AS PART OF THE EAST RIVERDALE-BEACON HEIGHTS AND GREATER CHEVERLY SECTOR PLAN?

Most of the County will be rezoned through the Guide to New Zones approved by the County Council in the initiation of the CMA and will generally transition on a one-to-one basis from the current zone to the closest new zone. However, since the East Riverdale-Beacon Heights Sector Plan and Greater Cheverly Sector Plan were prepared during the Zoning Rewrite and their rezoning components were specifically identified to occur through the CMA, properties within these sector plan boundaries will be rezoned according to the land use recommendations that were provided in the plans.

WHAT ARE THE GREENBELT AND MOUNT RAINIER NEIGHBORHOOD CONSERVATION OVERLAY ZONES?

The adopted Zoning Ordinance includes a new Neighborhood Conservation Overlay (NCO) Zone, which is “intended to protect and preserve the unique development features and character of established neighborhoods throughout the County, and to promote new development that is compatible with the existing neighborhood character.”

The first two NCO zones are being prepared for the historic core of the City of Greenbelt and single-family residential properties within the City of Mount Rainier. These zones will consist of neighborhood studies and development standards that, upon approval by the County Council, will be incorporated in the adopted Zoning Ordinance. The development standards will apply to new development, redevelopment, and building alterations in the areas covered by the NCO zones. 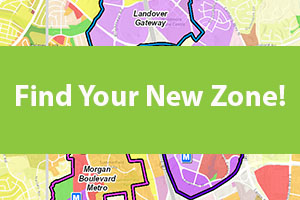